Jim Woodring’s only book published in France is Frank. I wanted to know more about his creative method, and for more readers to be aware of this unique author. (read the french version here) 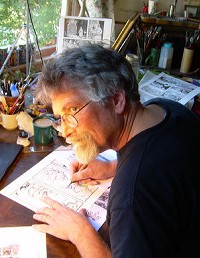 I believe you started your career working on illustration and animation: how did you end up creating comics? I did work in the Los Angeles animation industry during the 90’s, but my heart was never in it; it was just a job, and a frustrating job at that. It was during that time that I began the real start to my career by self-publishing the first issue of JIM, a 16 pp xeroxed “autojournal”. This was before zines became a widespread phenomenon, and it received a surprising amount of attention. One of my co-workers at the studio was the American cartoonist Gil Kane, who became a good friend and who recommended me to Gary Groth, the publisher of Fantagraphics Books, who offered to publish JIM as a magazine. That was the real beginning of my life as a professional artist. Could you please tell us a bit more about the creative process? Do you start with a detailed story in mind, or it is more of a vague concept that takes shape whilst you turn it into pictures? The Frank stories have always come to me as if dictated from an independent outside source. This is not the case with my non-Frank work, which comes about in the traditional method: struggle, pain, frustration, etc. The Frank stories have simply unfolded, story by story and character by character without any real cogitation on my part. In fact I have found to my sorrow that when I take a conscious hand in shaping the stories there is hell to pay. 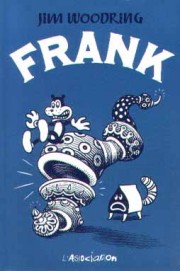 For example, when I was working on the book CONGRESS OF THE ANIMALS I made the unprecedented and conscious decision to have Frank leave the Unifactor and find a mate. The outside voice disappeared immediately and I was on my own. It took me a year to write it and it was a struggle all the way. Once the story was drawn and published I realized I had done a stupid and terrible thing; by giving Frank a life companion (Fran) I had ruined the setup; the stories had always been driven by Frank’s insatiable curiosity about his world and his search for meaning in it. Now that he was as good as married he stopped jumping out of bed at the crack of dawn to explore the mysteries of life. He became domesticated, complacent, satisfied. I repented, and the dictating voice returned, showing me that Fran had to go and telling me how to get rid of her without insulting her and without leaving a scar. Crazy, I know, but there you have it. How did you come to create your Frank character and its unusual world? It all came to me unbidden. Frank himself was drawn in response to the impulse to create a pure cartoon character; not a cartoon cat or mouse or dog but a pure cartoon, sui generis. It wasn’t until a couple years later that I drew the first comic, for Mark Landman’s BUZZ magazine; he asked me to draw a comic “that looks normal but isn’t”. It wasn’t until I had drawn up a dozen or so more stories that I began to see patterns in them. Each story introduced at least one new character, and each story ended with a return to the equilibrium of the opening setup and each story had a moral or point to it. I’m always finding things in the stories that I didn’t know were there when I drew them. 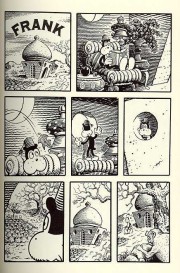 Do you have any other projects aside from Franck (in comics or other fields)? Will we see Frank in more adventures after Poochytown? I’m working on 100 pp of Frank material that will, God willing, contexualize and tie together POOCHYTOWN, FRAN and CONGRESS, making a single 400-page story that puts those books in a different light entirely. I’m also working on a large illustration project for a classic book. Which artists (comics or other) would you say have been a source of inspiration or influence? For example the style of certain pages in Frank reminds me of 19th century engraving, but also of the Renaissance (e.g. Hieronymus Cock or Brueghel the Elder – have I imagined these influences?) Oh well… one sees and absorbs lessons from so many artists in one’s lifetime that this is a hard question to answer. But there are some artists and works of art that have indelibly affected the way I express things. At the top of the list is the 1930’s cartoon BIMBO’s INITIATION by the Fleischer Studio. I saw it as a child and it changed the course of my life. The illustrator Boris Artzybasheff had a profound effect on my approach to symbolism. Bosch, Heinrich Kley, George Herriman, Harrison Cady, John Tenniel and countless others all showed me the way. 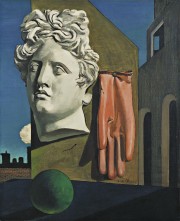 Whilst reading Franck I couldn’t help but draw comparison with Surrealism. Is that the case? Are you attracted to this movement? Do you know of American Surrealism magazines about Franklin Rosemont, such as “Arsenal” in the 70s (which featured cartoon art)? Well. When I was a wild and dreaming youth I was so closed-off and out-of-touch with the wider world that I knew nothing at all of Surrealism until I was seventeen years old. Then some friends took me to a huge, greatest-hits exhibition of Dada and Surrealism at the Los Angeles Country Museum of Art. I had no idea what to expect. The first painting I saw was De Chirico’s THE SONG OF LOVE and it froze me in my tracks; I connected with and was exalted by it immediately; it was such a perfect expression of the longing and “nostalgia for the infinite” that I had been striving to express in my own proto-work. I was in a stupor of thrilled revelation as vision after vision appeared before my disbelieving eyes. 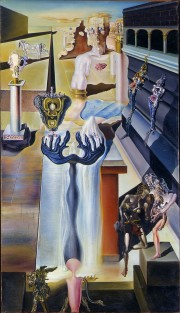 When I came upon THE INVISIBLE MAN by Dali something heavy happened. In that painting there are women hanging by their hair from a wall; they look as if they have been wrapped in black rubber and then slashed and disemboweled. What hit me hardest was that their faces were turned away from the viewer, as if in shame. My mind just snapped; I realized for the first time that art could express the most complex, taboo, unspeakable concoctions of human difficulty with almost unbearable power. I had no idea. It took me days to recover from the experience, and when I did I was a different person in terms of knowing what I wanted to do with my life. I have to say that Dali in particular became an obsession for me. I perceived him as an exemplar who took really horrible ideas born of pathetic human frailty and turned them into gold, fame and admiration. It was the only path to success that had ever presented itself to me as viable. I was so enamored of him that I didn’t stop to question how a painter who was a hard-edged miniaturist depicting internal states with visionary clarity could suddenly start producing huge, soft-edged paintings of externalities. It took me a long time to admit to myself that he painted his last great picture around 1940 and that I really didn’t like his work after that. Actually it was perusing The Dali Alice (price on publication: $400) at the art library that I first began to suspect what a fraud he had become. But yes, Surrealism had a big and liberating effect on me. 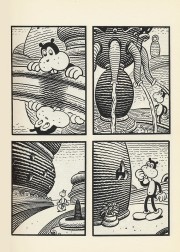 There were some latter-day Surrealists that I admired, but it was hard for me to think of that work as original; it all seemed to me to have its roots in the original movement rather than in wholly new modes of exploration; it seemed to me to be art about art, if you know what I mean. I’ve been called a Surrealist but I reject the title. Frank reminds me of some of the Tex Avery cartoons, with the “crazy” elements replaced by more poetic ones. Would you agree? I would love to feel that I had anything in common with Tex Avery.
Interview réalisée le 25/09/2020, par Noirdésir (traduction par Alix).